Slaves To The Generals

The debut novel from author Nathan Toulane is a story of war, unyielding love, death and betrayal. Charged with suspense and sheer storytelling power.

In 1953 Brian Miller enlists in The French Foreign Legion to eliminate the pain that lingers from previous lovers and wars.

As a result of this he finds himself catapulted into the chaos of French Indochina (Vietnam). During his posting he falls in love with a beautiful Vietnamese girl, Dai Long. Their love becomes strong and passionate - but Dai Long has a sister, Kim Ly, who is betrayal-personified, and will stop at nothing to destroy them both.

With the French Indochinese War raging in the background between The Viet Minh (Vietnamese Nationalist Guerrillas), and The French Colonial Forces, Miller's tale is one of fated-love and bitter betrayal, before his final destiny awaits him and France on the battlefield of Dien Bien Phu. 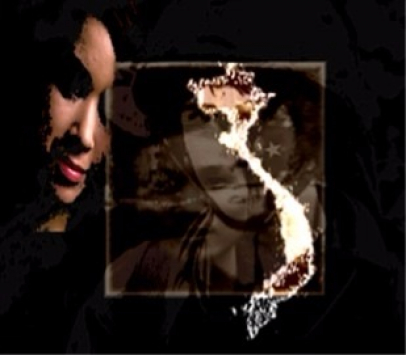 Slaves To The Generals: Book Trailer

“Get your equipment! Be on the square in three minutes…General Crosnier and Captain Alain Labadie wishes to address you ALL,” screamed Sergeant Taylor from the main entrance. The mess hall became a flurry of activity; men left their places, their chairs skirting on the pristine wooden floor with audible skreeeeps. Conversations in different languages—some angry, others emotional— rose to a cacophonous babble, and decorative posters of The French Foreign Legion, Légion étrangère fluttered, begging release from the walls.
Gensert sat in the officers’ mess hall alone. It was a poignant moment for reflection and the gathering of his thoughts; the Son Tay-Cao Bang mission still fresh as bakers’ bread in his mind. He straightened his uniform. Fully equipped he was, dressed as a combat paratrooper, the French officer badges on his shoulder an indication of rank and bravery. He opened his small wallet and the picture of his wife and kids cried out to him. Gensert shoved it away.
Captain Alain Labadie entered, striking a pose of authority, whistling a part of the Édith Piaf song, Le Fanion de la Légion. He smoked a cigarette vigorously with a gracious masculine charm. “The time has come. General Crosnier will address the men in a couple of minutes. After his speech, you’ll take command of Platoon Amiens.”
“Yes, Captain, a task so fitting,” replied Gensert, disheartened.
“Gensert! Why the long face?’ Labadie reiterated with passion.  ‘Remember what we are fighting for. Orders are orders. The Viet Minh are not invincible!’
“The Viet Minh are gathering momentum,” said Gensert.
“Ludicrous.”
“French Intelligence know about—”
“Speak your concerns,” rasped Labadie.
“Incompetence is all I see,” remarked Gensert. “Stronghold Beatrice at Dien Bien Phu fell on the first day of the assault. Some of our best officers are already dead—and what about Langlais? Surely he’s been transferred to the Opium campaign in the South.”
“Langlais volunteered for Dien Bien Phu.”
“Dear Lord!”
Labadie passed a paper to Gensert of the casualties so far. Gensert read the words with trepidation. He threw the paper to the floor in dismay.
“Colonel Piroth committed suicide? For what possible reason? He was an outstanding officer, brave and dependable.”
“After the first Viet Minh-artillery barrage, and the fall of Beatrice, the final straw was the failure of his artillery to silence the Viet Minh guns.”
“Outgunned?” inquired Gensert.

Labadie’s gaze locked and it was an uneasy gaze. Tension quivered his left hand; he slapped it around his back instantly. “The suicide of Piroth - may I continue.”
“Of course,” said Gensert.
“He apologized to Langlais and his fellow officers and then blew himself up with a hand grenade outside the command bunker.”

The story behind my historical fiction novel

The French colony of Indochina is the setting for my novel about Brian Miller, the main character, and his experiences of brutal guerilla warfare taking place between French Forces, the French Foreign Legion, and the Viet Minh nationalist independence movement.

The French Foreign Legion lost more troops in the whole Indochinese campaign, 1946 to 1954, than all other battles they'd been involved in. It was a complete decimation of forces, equipment and pride.

French Indochina was made up of three separate countries: (Vietnam, Laos and Cambodia). Its bloody history was one of occupation, and the exploitation of its resources and culture.

My novel was originally conceived back in 1989 as a short essay. However, I decided to create this version of my book  in May 2008.

It's taken me nearly two years to complete. The reason why I decided to do it is that I liked the novel Beau Jeste and enjoyed movies like March or Die and Legionnaire. Their plotlines were about the French Foreign Legion, but they were set against the backdrop of North Africa in the early part of the twentieth century. With my story, I wanted to write something different and set in a different time period and Continent.

In 2004 I watched the film The Quiet American, based on the excellent book by Graham Greene. It gave me a brief insight into the situation The French Foreign Legion found themselves in - fighting against guerrilla campaigns initiated by the Nationalist and Communist résistance movement called the Viet Minh.

Graham Greene, the author of The Quiet American, was a British journalist and lived in Indochina (Vietnam) for a few years in the late 1940s and early 1950s. He'd accompanied a few French Foreign Legion patrols in the North and South of Indochina (Vietnam) at the height of its turmoil and independence troubles. His writings about those experiences are the most beautifully written literature I've ever read. The Quiet American though did take a ‘negative review’ from one United States' newspaper criticizing his take on certain events.

Nevertheless, Graham Greene’s experiences are summed up perfectly with these words he wrote in a letter a few months after the novel was published in 1955.

I was in the dive bomber (the pilot had broken an order of General de Lattre by taking me) that attacked the Viet Minh post and I was on the patrol with the Foreign Legion Paras outside Phat Diem. I still retain the sharp image of the dead child couched in the ditch beside his dead mother. The very neatness of their bullet wounds made their death more disturbing than the indiscriminate massacre in the canals around.

Lastly, writing a historical fiction book with many characters and scene changes, especially when set in a different country has been difficult at times, but I think I've managed to strike a good balance.

France began colonising the first part of Indochina in 1858. One of the first military assaults was a Navy mission to bombard Da Nang in revenge for the persecution of a group of Roman Catholic Missionaries. The following months the French Army took Saigon. It was then - French Indochina gradually formed into the territories of TONKIN, ANNAM, LAOS and COCHINCHINA. It would be one of the prize jewels of France’s Colonial Empire.

However, the independence struggle would gradually be joined with the local population in the years to come, and because of this threat, forts and small military outposts were built. Manned by various troops. The French hoped this move would gradually bring order to their colony.

If sent to Indochina, the average life expectancy of a serving soldier was not expected to be long. If you did survive, then some settled in Indochina after their military contract, many with a local Congaie (term for Vietnamese mistress or wife).

The French administration structure and the running of the colony by diplomats gradually built a pace as the years passed.  In addition, the exploitation of Indochina’s resources, including the cheap labour, opium and other precious commodities continued without restraint during the following decades. This action caused a gathering resentment by the local population to intensify - however, there were complications. Different factions and ethnic groups continued to argue amongst themselves, and this was a distracting precedent for any cohesive résistance movement to form against the French colonists.

All of this was to change radically though, when the Japanese invaded the country in 1940. The Japanese duly signed an agreement with the Vichy French Government allowing them effective control of the colony.

After a bloody surrender in 1945 by the Japanese, Ho Chi Minh and the newly formed Viet Minh Nationalist guerrilla forces seized control of Hanoi (Vietnam), and Ho Chi Minh was proclaimed the country’s first independent president.

During these first instances of unrest, and after international mediation, ‘The Treaty of Paris’ was implemented in 1946 to try and secure a peaceful agreement between Ho Chi Minh’s Viet Minh forces and the French governing administration: who wished to re-occupy some parts of Indochina.

It was a pointless exercise - the agreement collapsed - and within a few months a full-scale war had began.

From 1946 to 1950 there was mostly sporadic fighting between the French forces, composed largely of Légionnaires, Colonial African troops, and locally recruited Thai and Indochinese ANV battalions.

The Viet Minh under the leadership of General Giap increased in strength and his army was supplied from 1949 onwards by Mao Tse Tung’s Chinese Communist government, granting massive assistance in firepower and logistical support. This was a disturbing fact for contacts in security circles to digest - based back in Paris, Hanoi and Saigon. And also, supplies and manpower were cut in 1948 due to the massive financial restraints put on the French Military by affairs in French controlled Algeria and NATO commitments for security measures against the Soviet Union in post war Europe. 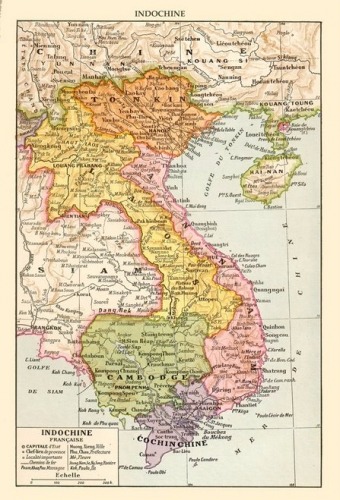 Map of French Indochina in 1930

A Viet Minh soldier captured by French Union Forces in 1953

News about the situation at Dien Bien Phu

In 1950, a turning point battle happened in Indochina. This occurred during a disastrous military mission at Cao Bang near the Chinese border. A massive and substantial French force was ambushed and wiped out by the Viet Minh. It rammed home brutally that parts of Indochina were total no go areas. This and other factors began to affect French military, civilian, and public opinion on how the war was being run.

In the summer of 1953, intelligence circulated about an impending threat to the French protectorate of Laos. Top Military brass including General Henri Navarre and General Cogny toyed with the idea of building a fortress camp in the Dien Bien Phu Valley, to be supplied totally by air. Their prerogatives then to attack the enemy Viet Minh forces from this base - and pursue them into their hideouts near the Chinese border.

‘Operation Castor’, the name of the mission began in November 1953. A crack commando group from the 2 BEP Foreign Legion paratrooper brigade and other assistance troops secured the position, and re-enforcements were parachuted into the area day by day.

The Viet Minh could have ignored this action by the French and continued their harassing tactics of French Forces. However General Giap, the commander of the Viet Minh forces, decided to attack at all costs, throwing all of his total resources and manpower into the Dien Bien Phu campaign - helped massively by over 80.000 locals and tribesmen supplying his main army.

The battle opened. Fifty-seven days and nights of hell and entrapment ensued for the French forces dug in at Dien Bien Phu.

It was on May the 7th, 1954, that the end of the battle by French Surrender was agreed…French Indochina was finished. There had been 20,000 Viet Minh casualties, and at least 2,000 of the French garrison had been killed, with many more taken prisoner. Only one in three of the French prisoners would survive the tortuous Viet Minh prison camps in the weeks and months of captivity that followed.

The new country of Vietnam was divided along the north parallel. Ho Chi Minh’s communist forces controlled the North. and Emperor Bao Dai became leader of the new Republic of South Vietnam, supported by the United States.

It was the precursor of new brutal war which began in 1963.