Exorsist And The 80s Guy

A note fluttered in the breeze like a butterfly, nestled behind the windscreen wiper of that black Mercedes.

Tony, the lead singer, from a defunct new-wave-band approached, dressed in a scarlet suit - with black leather boots - raised up to his knees. A long black gothic coat hung around his shoulders like a cape. He saw the note and snatched it from the wiper. Then he read it aloud in his mind. An Archeological dig? Religion? Mmm. There is definitely a song there, he thought.

The muscular chauffeur opened the back car door and Tony slipped in. Suddenly, an abrasive shout startled him. A shuffle of steps and in an instant a black suited Exorcist was knocking on the passenger window: ‘A word, if you please,’ he said.

‘Is your time, more vital than your life...I advocate, you listen, to what I have to say.’

Tony’s brow burrowed. ‘Great! Now look…all correspondence should be directed to my personal assistant. Anyhow. I’m going to the airport to—’

‘Then I will come with you!’

Abruptly the car door slammed shut and the car edged outwards into the road.

‘Be quick Father,’ bemoaned Tony. ‘I’m tired of religion, being rammed down my throat!’

‘Did you know, that a Gregorian chant, run in reverse and featured on one of your band’s albums, has been found in an archeological dig in the Israeli desert.’

‘On Christ! What drivel, surely you’re not that gullible.’

‘I’m on astute ground. I’m not taken in easily.’

‘Tell me the Album’s name then?’

‘What a surprise.’ Tony lit a cigarette and inhaled. ‘But y’know, only ten copies were produced. It was aimed at them sharks at the press. To give ‘em something to write about.’

‘The Exorcist’s’ features became stern. ‘That Gregorian chant recording on it, was used, recently, for black magic purposes… to conjure a spirit, likened to a God by the Roman Empire, in the ruins of a Catholic Church. The Israeli army stormed the— ’

‘Where’d you get that information?’

‘From a possessed client I just treated. Your brother was her lover. Did you know that too?’

Tony’s eyes stared with daggers. ‘I say again. Where’d you get that information?’

‘From a psychiatrist, who met your brother…he was…struck by lightening.’ The Exorcist’s hands trembled, mouth quivering. ‘You, you are in grave danger. You must destroy all the recordings from that Album you created.’

‘Would you stop the car please,’ raged Tony. His eyes followed to the Exorcist’s crucifix. He agitated further. ‘Now, get out!’

The car screeched to a halt and the chauffeur exited. ‘The Exorcist became frantic. ‘There is evil in that recording. It KILLED YOUR BROTHER. YOU HEAR ME!’

‘Don’t make me throw you out,’ spat Tony. ‘You nosey fuckin’ son of a bitch.’

‘No! No! You must listen. Pay attention. Only through prayer, can you fight the curse.’

‘Never try to contact me again. Ya Billy Graham wannabee!’

There was a kafuffle of hands and fists and ‘The Exorcist’ had been dumped onto the side of the street. In an instant, a screech of tyres smeared rubber onto the road and horns honked with fury.

‘The Exorcist’s’ gaze fell, then his eyes lifted, up to a child’s. She was giggling and pointing with her finger. ‘Why are you sitting in the gutter?’ she said.

‘What’d you think that guy meant?’ retorted the chauffeur.

Tony lit a cannabis joint. ‘ Dunno, gotta be some crank. But dammit! Shit! He’s got me thinking…my brother did go nuts last month. In that church, where “The Omen” movie was made.’

‘I know,’ remarked the chauffeur. ‘The large worship-hole in Guildford - but your brother was ill, mentally ill. The LSD done him in. You know that.’

‘Right…right, other than: Oh! I dunno, what to make of it. The stuff about Israel.’ Tony sighed, his eyes felt rough. He then picked up the Exorcist’s note, which was crumpled on the backseat. He noticed a phone number on it. ‘Say, erm. Maybe, I should call him. Y’know, to apologise. I was offhanded.’

‘Knock it off,’ shot the chauffeur. ‘You said it yourself. The guy’s a crank.’

‘So, so I did. But “Stanley Kubrick” was classed as a crank. Didn’t stop him being a genius though, did it?’ 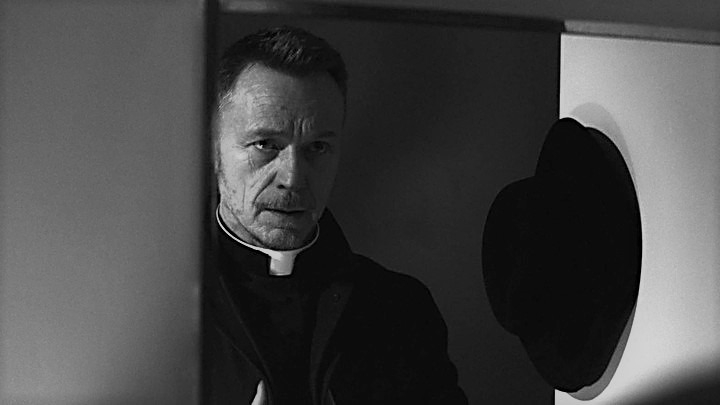