The year was 1604, and this night was silent. Cold. But yet it was alive, it was alive to all who sat in that circle around a man giving orders. He was detailing plans. A man dressed in head to foot in all-embracing regalia, clutching a book written by the traitorous Catholic monk Martin Luther. He began reciting from the book. The words slipping off his tongue with periodic rage. Martin Luther was alive in the words. Was alive in the sounds they made, was alive in the man’s breath, and the man’s breath was like fire because of Luther’s preaching, and was foul as he exhaled—then it turned into vapour trails, leaving its mark in the chilly atmosphere.

Murmuring in the circle of people brought forth a shout. An exclamation of ‘DEATH TO THE KING! THE WORSHIPPER OF LUTHER!’ The words repeated over and over like an echo travelling back from a cave of tormented souls.

Then a cloak of darkness descended onto the scene smothering all who were in the room. With shock and horror blood dripped from the man’s mouth, he convulsed on the unholy ground, and his hands reached up to the skies seeking help. The pain was unbearable as the sound of cranking machine increased, and the noise of cracking bones brought forth a cry of unbearable pain and suffering.

Guy Fawkes’ bloodshot eyes flickered open. He was in the Tower of London. The light dim, burning lanterns either side of his head, flaring like fiery demons. The smell from the smoke they gave out created a thick mist that turned into a putrid dust. The place was Dank. Damp. Full of sadness, regret, lies, pain and suffering.

Guy Fawkes, the instigator of the gunpowder plot to blow up Parliament and King James I was strapped to the slimy rack. A large torture device that would stretch a man’s body to the point of death. Fawkes tried to breathe—but only saliva and excrement frothed up with blood—formed in his mouth, and a he gave out a sickening cough that made even the torturer grimace.

Footsteps approached. A chink of keys and voices of submission followed. Bang! The door opened, there in the silhouette of the doorway stood James I. Guy Fawkes’ sworn enemy. The King ordered every man in the room to leave. He wanted to be alone with this traitor. The door slammed shut and an eerie silence transpired, with only the odd squeak from a longhaired rat and the drip of water from the ceiling to disturb the quietness.

Fawkes closed his eyes, he could see Archbishop Thomas Cramner being burned at the stake, on the order of Mary Tudor, that bloody Catholic Queen. He wanted to do the same to the King.

Instantly the King thrust his mouth up to the greasy ear of Fawkes and he took delight in his suffering.

‘You think. That your pathetic plot to disrupt and destroy my power would work. You think me! Me! Would be afraid to confront you! I want to see the man who dares to confront my scared rule perish.’

Fawkes’ lips quivered, his eyes rolled, and mucus slid down his nose, then with all of his effort he spat into the King’s face. The monarch staggered backwards, knocking into the filthy brick wall. He withdrew his sword from his side and lunged at Fawkes. The shine of the King’s sword was dazzling. ‘I'll see you’re Hung, drawn and quartered,’ he roared. ‘Pray tell! It would’ve been better for you if my sword—tore into your rotting carcass…Good luck Fawkes, in the afterlife.’ 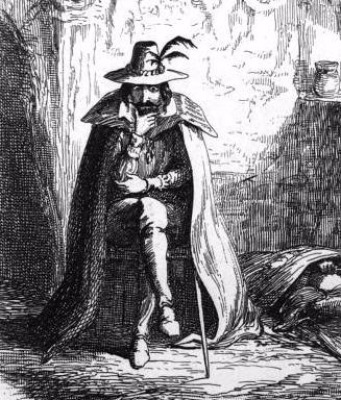