The muscular Frenchmen lay in a muddy ditch, purple lips quivering, eyelids twitching, face ashen with shock. He breathed with cumbersome fatigue, and the rattle and gurgling from his throat indicated death hovered nearby like a black crow sitting atop a tombstone.

A German soldier, SS Stormtrooper to be precise, stood over the man, dressed in black, the Swastika and a picture of ‘Hitler’ within his breast pocket. He paced around in a circle, his long black boots shining like wet leather—with a pistol strapped to his waist. He moved without grace, without compassion, without any kind of comprehension to the human condition of pity. There was a certain depravity to this German soldier. He’d been a guard at a Prisoner of War Camp in Poland, and his mistress there had set her Doberman dogs onto any Russian soldiers who had tried to escape from that terrible place of biting cold, desperation and hunger.

The German soldier removed his pistol from his waist, cocked the trigger, and smiled with malevolence—a malevolence on a par with an evil spirit. He aimed the pistol at the Frenchmen’s head; ready to commit his brutal deed.

Then a glint, sparkling as if a diamond was on fire changed into the colours of red and blue. The German soldier knelt down. He observed a France Libre badge pinned to the Frenchmen’s shirt. The German soldier gritted his teeth in fury, grinding enamel, spitting out bits of his own teeth with fury.

‘What is this?’ he screamed.

No reply came from the Frenchmen.

‘You tell me. Resistance scum! Where’d you get this item? Only the Free French Army in Britain possess such a badge.’

The Frenchmen smiled, though his lips trembled. Even his brisling moustache could not disguise the fear they expressed, though he found courage. He snapped his bloodied finger and thumb. ‘FOR MY COUNTRY,’ he roared. ‘It gives me strength. Power! Pride! Liberty! Something you German dogs can’t rape and steal!’

Abruptly a white flash exploded into a cloud of amber-like light. A bang rang out, followed by the smell of smoke. The German soldier had fired his pistol into the head of the Frenchmen. He kicked the corpse, and growled with pleasure, as if he was a rabid wolf enjoying the success of a bloodied kill. He rifled though the dead Frenchmen’s pockets, took the French Libre badge and smiled with ecstasy.

While he was crouched on the ground a strange quietness ensued. Eerie. Unsettling. Sinister. As if beasts from within the Earth were preparing to unleash total war. The German soldier rose upwards, stepped back from his position, grabbed his binoculars and gazed out to the sea with a steely stare that was as hard as iron.

The German soldier was standing on the territory of Normandy, France, year 1944. His eyes focused—deciphering small black blobs in the horizon through the viewfinder.

What were they? A flock of birds? Storm clouds? A trick of the mind? The German soldier removed the binoculars and squinted, his head dropped for a minute, and he hummed the German National Anthem. Next he scratched his brow, until it became bloodied. The hairs on the back of his neck went static for some reason. Instantly the silence evaporated and the sound of cannon fire and artillery guns detonated. The German soldier raised his head and threw away his binoculars.

There! So terrible to believe, in the sea, in the horizon were weapons of war. The scene was spectacular, although terrifying. The German soldier witnessed the entire Allied Fleet approaching. He looked to the skies; he could hear the rumbling sounds of planes, and the roar and whoosh of anti-aircraft fire creating a ‘hell’ that had come to fruition in the human world.

The German soldier tried to run to his field phone, but he slipped. A brief stillness transpired. Then the entire Allied fleet unleashed all of its deadly firepower. The German soldier glanced at the French Libre badge in his hand.

Fire. Blood. Smoke. Mud. Revolting smells. Heat and fire. Everything went mad! The German soldier screamed for ‘Hitler.’ He managed to grasp the field phone and pressed the receiver.

‘Hello! Hello! There! Message coming through.’

‘Report!’ barked a voice in reply.

‘It’s started. I’ve seen the fleet. Armageddon! Apocalyptic! We need every available unit sent to Omaha Beach.’ The shrill of the German’s voice made it sound inhuman.

Before he could speak further. Sparks appeared before his eyes. Roars like hungry lions deafened him, and the indefatigable consequences of war wrenched the phone from his grasp. An explosion hammered into him, he was sent flying, mortally wounded. He lay on his side bleeding profusely from a head wound. He could see the dead Frenchmen nearby. There was a smile on the Frenchmen’s face. The German snarled and screamed: 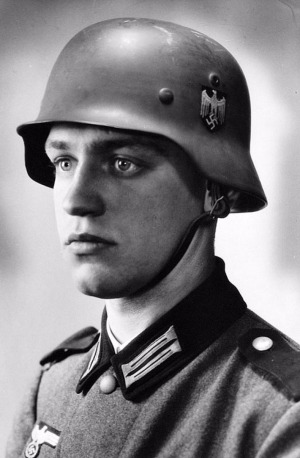