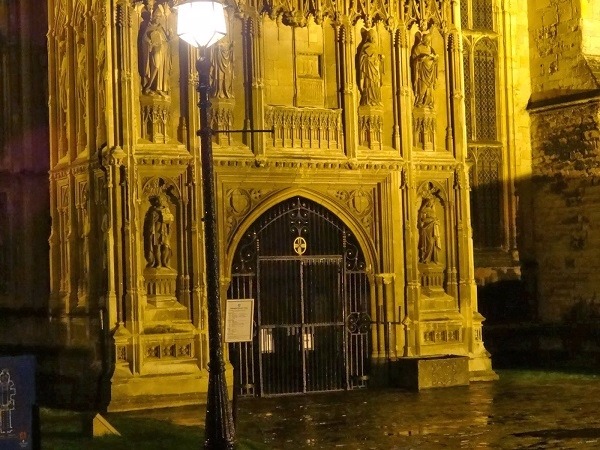 Canterbury Cathedral stands with elegance. Imposing. Historical. Unyielding. As the winter sunshine covers its remarkable structure. Then I see glowing birds fly around its steeple, their eyes turning with surmise as they descend down to the Cathedral’s lawns—a gust of wind follows and they take to the trees—resting on the hand-like branches which creak like an old granny’s rocking chair.

The Cathedral has an authority of religious power moving within its very bricks and mortar—its history stems back to the time of William The Conqueror; that brutal butchering tyrant. However, he is not alone in the world of tyrants that have stained the Cathedral’s interior with blood and treachery. Other despots have channelled the Cathedral’s conventions to suit their own needs. Henry II for example, used the excuse of ‘betrayal’ in the Cathedral to strike down Thomas Becket, the Archbishop of Canterbury in 1170. Nevertheless, Henry II failed to extinguish Becket’s persona of religious sacrifice—as he rose again in spirit and soul—to be venerated as a saint and martyr by both the Catholic Church and the Anglican Church.

For Becket’s sacrifice a magnificent tomb was erected in the Cathedral to celebrate his martyrdom and his life’s work. It was a place of pilgrimage for many, who would travel across the muddy tracks of Europe to stand and pray before it. Others sought miracles from it, from leprosy to the plague, and would murmur ‘Amen’ in honour to Becket’s monument—to cure their conditions.

Years passed like rolling rocks worn down by stormy seas and you would’ve thought that the bloody memories in the Cathedral would fade and the turmoil subside. This was a pathetic fallacy. Another butchering tyrant emerged to have the final say on Becket’s magnificent resting place. King Henry VIII. That usurper! Woman slayer! Scoundrel! Impotent despot! Whose savagery knew no bounds, decreed in 1538 that Thomas Becket be stripped of his sainthood and his memorial in Canterbury Cathedral be defiled, wrecked, and his bones crushed. The sadness of this act and the destruction that transpired were a testament to King Henry VIII’s vindictiveness and conceit. A legacy of devastation and misery followed in its wake. Monks and clerics slain as the ‘Act of The Reformation’ took hold, and the cries from these holy people maybe still lurk in the atmosphere of the Cathedral to this very day. Captured in the walls and tombs like some kind of stone tape: a recording device of the macabre.

I think I hear these distressed voices like whispers from abused ghosts when I walk along the Cathedral’s passageways, and past the lonely candle now representing Becket’s destroyed tomb.

Either side of me and underfoot I notice names engraved into the damp ashen stone. Former archbishops, famous generals of war, writers and poets, I do wonder as they lie in their tombs if they can reach out to the living with supernatural surprises.

I saunter with heavy footsteps and head to the outer parts where the grass spreads outwards like an expensive carpet. The dew on the lawn and the wetness in the sky causes beetles to scurry along the ground beside me in single file fashion. They resemble soldiers off to war. Unfortunately their war will soon be over when the sparrows, waiting close by with hungry eyes—devour them.

I notice a woman bishop and bid her ‘good day.’ Then I hurry along to the arched entrance and towards the Cathedral gates.

I can hear ‘prayers’ from the basilica travelling to the outside while the large bells knock against the steel clangers in the tower, elevating the atmosphere to devotion and worship. A priest’s voice echoes as he reads out a sermon to the congregation sat on wooden chairs and I realise Canterbury Cathedral is at peace from its turbulent history at this point in time.