The Ring In The Glass

THE RING IN THE GLASS is dark and authoritative yet beautifully written.

It has practically no equivalent when it comes to scaring its reader.

This is thrilling stuff, dispatched with all the careful effort that is

Furthermore, if the reader is eager to hitch a ride into true biblical, religious horror

then THE RING IN THE GLASS will not disappoint. Turn the pages if you dare!

A painting depicting events about The Temptation of Christ, haunts a boy—Samuel Morgan. In addition, the boy’s prior involvement in the Occult with Alan Wilson, an insane witchcraft scientist has unleashed a terrifying demon with devastating effect. Samuel’s mother, Marilyn Morgan, a successful Pharmaceutical director, demands help from psychiatrists and doctors in an effort to cure her son—who now suffers from demonic possession. Their help though is ineffective.

This drives her to desperate measures. She seeks out a priest, Reverend Stephen Mason, begging him for assistance. Mason agrees, but first, he must fight doubts and faith about God, before confronting the demon, Beelphegor, which resides in the boy. This is not an easy tale to read. It’s a roller-coaster ride of terror—which digs deep into all our fears about the never-ending struggle between true evil in our world, and the concept of true faith in God—that can ultimately defeat it. 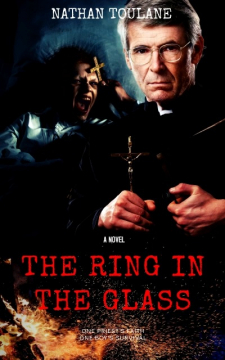 After my previous novel Slaves To The Generals. I wanted to write something that had epic-like proportions running behind the plot - and a thrilling tempo and pace that would keep the reader captivated.

The trouble is, the more characters you place in a novel, the more twists and turns will come into being with the story. And trying to hold the plot together can get extremely difficult and perilously confusing.

I remember when I watched a particular horror movie from the 1970s - and the thing that drew me towards its story was its type of character plotlines and the number of avenues it explored with them. It kept me hooked. The movie had several interesting perspectives, and for this reason, it gave me the determination to do a similar type of story - with my components added.

As for my characters in The Ring In The Glass, the main ‘one’, which my novel centres around are Samuel Morgan. He is a disturbed child and is going through the usual messy stuff of growing up. Then there’s Marilyn Morgan, his workaholic mother. Jessica Wells, her flirty personal assistant. Jason Owen, her handyman: a hot-head - and partial to alcohol.

As for our heroes, well they are in the form of a priest-counsellor called Reverend Stephen Mason - filled with doubts about his self-worth and diminishing faith. His best friend, a bishop called Martin Fielding. And then we have a child psychiatrist, Dr. William Baldwin, and his associate Dr. Hopkins. For something extra, I added an Egyptian Exorcist, called Macmood to the fold. He is a strange hermit-like character who lives in a cave in the Sahara desert. Macmood has an array of advice and demon-fighting tools at his disposal.

The rest of the crew in The Ring In The Glass is a peculiar bunch, one being a spiritualist Medium called Mackintosh. Then there are academics, eccentrics, young lovers, drug-using kids, music producers, and other nasty pieces of work. One of them is Alan Wilson, the main bad guy, and his demon sidekick Beelphegor.

I knew when I was writing my novel that I had to get a religious’ theme to hover behind the story. So, as I said in the preface of my book, a painting about the ‘Temptation of Christ’, which I saw as a young child growing up in East London was the holding point for the boy - Samuel Morgan in the plotline. In hindsight, maybe I overused religious undertones, but I needed these elements if my book was not going to fade away.

I spent the first six months of 2008 putting the outline of my narrative together. However, I knew I had created a lot of trouble for myself by doing such a varied and complicated plot. So consequently, I had to spend the next four and a half years getting this to gel together and form into a coherent storyline. There were constant rewrites, changes to the ending, and other aspects to do with the characters that needed rearranging. Snappy dialogue is something else that I focused on, as I wanted the characters in my book to have their own unique identity.

When I finished The Ring In The Glass in late 2013, early 2014, I felt so much relief and accomplishment - as it is the hardest piece of writing that I had ever attempted. When you take on writing a one hundred-and twenty-thousand-word novel - sometimes you do not know where it will lead you, and sometimes you think you will never get it completed. It is like being an adventurer because you will sit at your writing desk one day and wait for inspiration but nothing will come. Yet, on the other hand, you could be watching a television soap and an idea would just pop into your head. So consequently, when this happened to me, I would quickly dash to my pen and paper situated in my bedroom and scribble down some notes on my writing pad.

The Ring In The Glass is a stern novel with a forthright message behind it. This being, that mankind can be creative, loving, helpful and resourceful. Yet if you go to the other extreme, mankind seems at times hell-bent on war, destruction, and complete mayhem.

Nevertheless, I do hope my novel will connect with you in some way. For in essence ‘we’ are all descended from the same source. It is just how we develop in ourselves that make us what we are in the end. 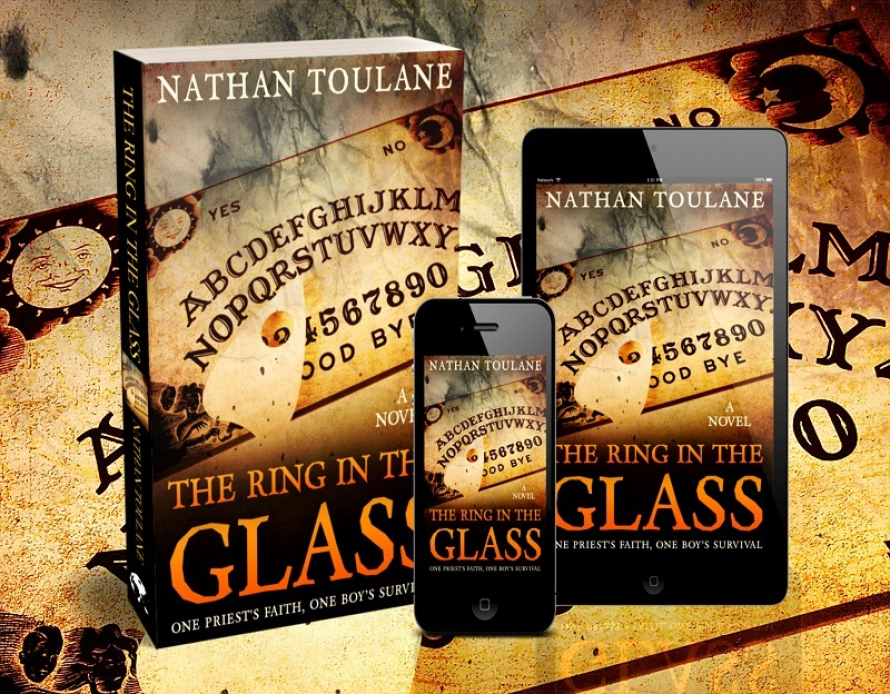 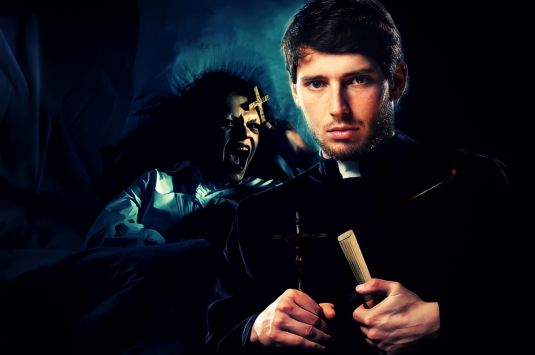 Publicity Pictures: THE RING IN THE GLASS

THE RING IN THE GLASS 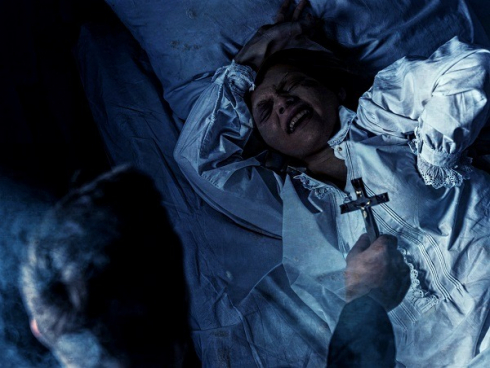 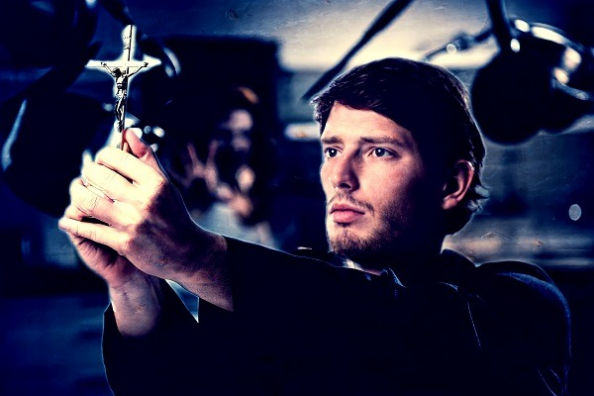 The story behind THE RING IN THE GLASS 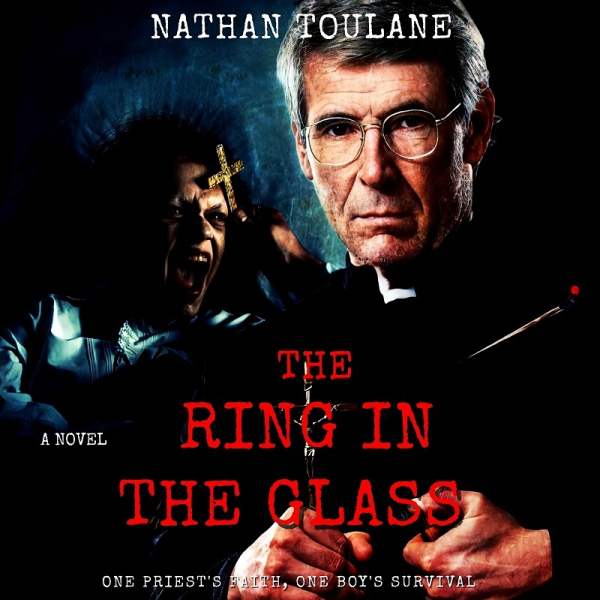